With plenty of bonuses available to play the Football Star slot game for real money, and a free play version you have the best of both worlds.

Where Can I Play Football Star For Real Money?

The Football Star is another of the many fun to play and potentially very high paying sports themed slot games which Microgaming have launched over the last few years. 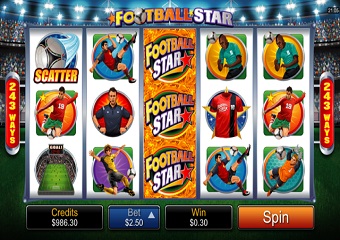 What you will be hoping to see as you play off any number of spins when playing the Microgaming designed Football Star slot game is at the very least one winning combination being formed, for when you do so you then will see the Rolling Reels feature kicking in.

What the Rolling Reels feature does is to remove all matching reel symbols that formed a winning combination, once the pay-out has been credited to you and new symbols then fill in the vacant positions on the reels which could see you forming event more winning combinations.

The Football Star slot has a pay-out percentage of 96.29%.