You can test drive the Stickers slot game directly from our website and check out our in-depth review of that slot and claim an exclusive high valued bonus to play it too.

Where Can I Play Stickers For Real Money?

If you are a fan of playing slot machines on which lots of wild symbols can spin in, then one slot game I urge you to play much sooner rather than later is the Stickers slot from NetEnt. 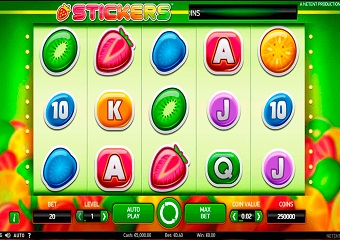 What is going to happen when you are playing the Stickers slot game whenever a wild symbol is spun in, is that the wild symbol will then be locked into position and something known as the Sticky Spin feature will then be triggered.

That re-spin feature will only stop and end as soon as on any re-spin a wild symbol isn’t spun in, so with some luck in playing it is possible to get loads of wild symbols spinning in and hopefully helping you form lots of very high paying winning combinations across the screen.