One slot game that really does get lots of attention from avid slot players is the Secrets of Atlantis slot, and this review will give you an overview of what makes it so very playable.

Best Casinos to Play Secrets of Atlantis for Real Money

Where Can I Play Secrets of Atlantis For Real Money?

Any video slot offering a long term expected pay-out percentage of at least 97.00% is worth playing in my option and you will be interested to learn that the Secrets of Atlantis has an RTP of a slightly higher 97.07%! 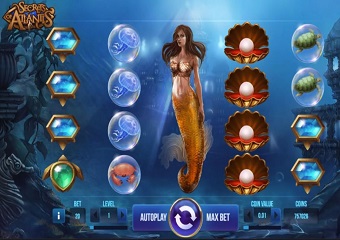 The Secrets of Atlantis does of course come with an underwater theme and being as it is NetEnt that have designed and launched that slot it does go without saying that it comes with some stunning animations, graphics and sound effects too.

With 40 pay-lines on offer it is a slot that you will have plenty of chances of spinning in any number of winning combinations, and it is a slot on which a huge 320,000 coins can be won whenever you have triggered its main bonus game feature round.

That bonus game is a Colossal Reel Re-Spin feature and it is also a slot offering both ways playing format and structure and one that can also award you with a nudge feature too, so do consider playing the Secrets of Atlantis as it is certainly an exciting and fun to play slot game from NetEnt.

The Secrets of Atlantis Slot has a pay-out percentage of 97.07%.

wpDiscuz
0
0
Would love your thoughts, please comment.x
()
x
| Reply
Hurray! There is a competition going between users of our site!
You have to do nothing, but browse out site, and win a daily prize. Click here to read more.
You current ranking:
Time Left: 14h 50m 9s