To play the Silent Run slot game come and checkout our review as we have the demo mode version of that slot available, and some real money bonuses to give away.

Where Can I Play Silent Run For Real Money?

The Silent Run slot game is an unusual slot in as much as its them isn’t one you often find attached to video slots, and that theme is a submarine one. 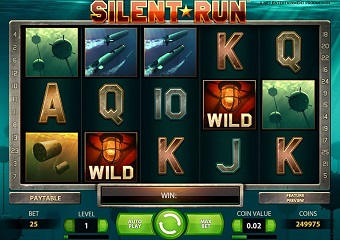 The only thing to be aware of as far as the playing structure and format goes on the Silent Run slot game is that you are going to be obliged to have to put every single one of its pay lines into live play when playing that slot.

There are 25 pay-lines that will need to be activated and as such you are going to have to wager at the very least 25 coins per spin you play off, however the coin value settings are fully adjustable and you can wager any upward increment of 25 coins too per spin if you like to high roll.

The shooting based bonus game is going to see you having to select a ship to blow out of the water, and if you make a wise decision as to just which of the in view ship to shoot and blow up from those presented to you on the bonus game screen you could win big.

wpDiscuz
0
0
Would love your thoughts, please comment.x
()
x
| Reply
Hurray! There is a competition going between users of our site!
You have to do nothing, but browse out site, and win a daily prize. Click here to read more.
You current ranking:
Time Left: 23h 23m 39s