One slot game that really does get lots of attention from avid slot players is the Twin Spin Deluxe slot, and this review will give you an overview of what makes it so very playable.

Where Can I Play Twin Spin Deluxe For Real Money?

I always look for some of the most unusual slot games to play, and one that I do find myself playing time after time when I see it available at any online or mobile casino site, I am playing at is the Twin Spin Deluxe slot. 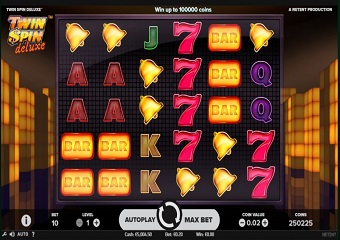 What you should enjoy about playing the Twin Spin Deluxe slot is the unique way the reels are going to spin and stop, for each time you do send its video reels spinning something unique is going to happen.

What will happen when you have set your chosen stake amount and then sent the reels spinning in that at least two of the reels are going to become linked reels, and as such those two reels will spin and then stop with the same reel symbols in the same position on both reels.

Obviously what you will ideally want to see happening when you do play the Twin Spin Deluxe slot game is that more than two reels become linked in that way, for the more of them that do become linked reels the much greater a chance you will have of winning big.

The Twin Spin Deluxe Slot has a pay-out percentage of 96.61%.