Plenty of slot players make a beeline to play the Arcade Bomb slot, and this review will let you know what it has to offer you and you can play it for free too.

Where Can I Play Arcade Bomb For Real Money?

The rapid-fire type of playing structure attached to the Arcade Bomb slot game from Red Tiger Gaming is going to appeal to plenty of playing that are seeking a fast and furious slot playing experience. 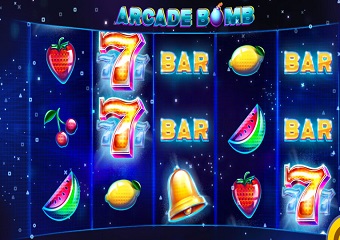 The Arcade Bomb is a slot which has what is known as an Adjacent Pays playing structure, and as such if you do get matching reel symbols spinning in alongside each other then you will have formed a winning combination.

What you are also going to find can be a potentially huge paying type of bonus feature attached to this slot are the Reel Bombs, they are special reel symbols that will spin in and countdown as you are playing off consecutive spins and can then explode.

Once those reel symbols explode, they will form a unique pattern of matching reel symbols, depending on just which Reel Bombs have spun in, but make no mistake about it they can massive increase your winning chances when they do spin in and finally blow up!