A full review of the Golden Man slot from Rival Gaming, and information on its payout percentage and bonus games and bonus features.

Where Can I Play Golden Man For Real Money?

They do say that robots are going to take over the world eventually and that is something you will certainly discover when playing the Rival Gaming designed Golden Man slot! 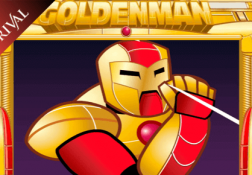 Slot games that were launched over a decade ago can often be overlooked by slot players, as most players want to play the very latest slots which offer all manner of unique featured and bonus games too.

However, there are plenty of older video slots that are still available online from companies such as Rival Gaming that are worth playing and one such slot is their Golden Man slot.

What it offers in addition to a medium variance base game are two additional bonus games, both of which could award some large amounts of cash to players.

The first of those bonus games is a set of 15 free spins on which x3 multipliers are in play, and the other bonus game is a picking game on which players get to make up to 16 spins in total, so that bonus game can also be a quite high paying one too with some luck in play it offer and this slots RTP is a high one too.

The Golden Man Slot has a payout percentage of 96.00%. 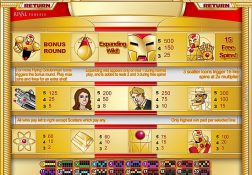