DragonGaming just announced that it has partnered with BetOnline and will now offer its entire gaming portfolio to players at BetOnline.ag. Players who are not familiar with the DragonGaming should check out the new selection of games as they will be impressed with both the design and gameplay.

DragonGaming does not have a massive gaming portfolio considering the company went live only in 2019. However, in this short period of time the team has come out with 3 table games and a total of 15 online slots. All of these games have been tested on an independent random number generator (RNG) platform and have a payout rate that is above 96 percent.

These games have been developed using the latest HTML5 technology which means they are compatible with both Android and iOS devices. Players will be able to access the entire DragonGaming portfolio and enjoy these games while on the move. The developers expect players from all over the world to try out their games and have hence made them available in over 25 different currencies and 25 different languages.

If you have never tried out any of the games from DragonGaming, we suggest you start with games like iSCREAM, Safari Stampede or the Wicked Witches. These games have interesting themes, high quality graphics and a number of special features that change the volatility of each game. 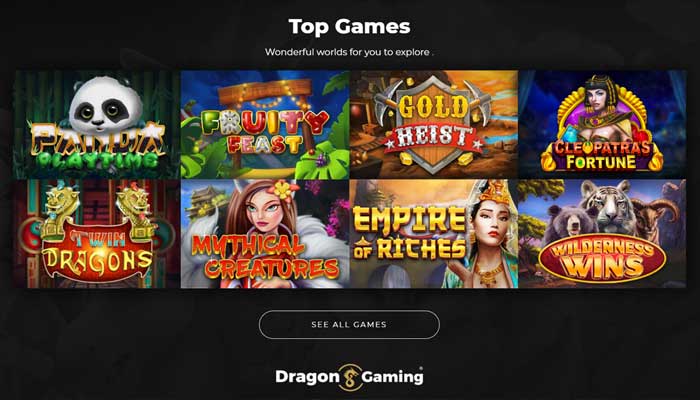 DragonGaming is not restricted to developing just online slots and table games. The company also has a number of other software services covering different verticals that service B2C interests. These special services include user management tools, boosting player reach, game assets and marketing solutions that revolving around bonus campaigns.

Even though DragonGaming is a relatively new comer in the online gambling market, the team behind DragonGaming are an experienced bunch that brings together over 15 years of gaming experience. The developers have created a number of successful online slots and table games under different banners over the years and decided that it was time for them to band together and create games under their own banner.

DragonGaming allows players to check out its gaming portfolio in free to play mode as well as in real money mode. The free to play games are available from the DragonGaming website while the real money games can be accessed from its list of online casino partners which include BetOnline.ag.

wpDiscuz
0
0
Would love your thoughts, please comment.x
()
x
| Reply
Hurray! There is a competition going between users of our site!
You have to do nothing, but browse out site, and win a daily prize. Click here to read more.
You current ranking:
Time Left: 18h 42m 23s