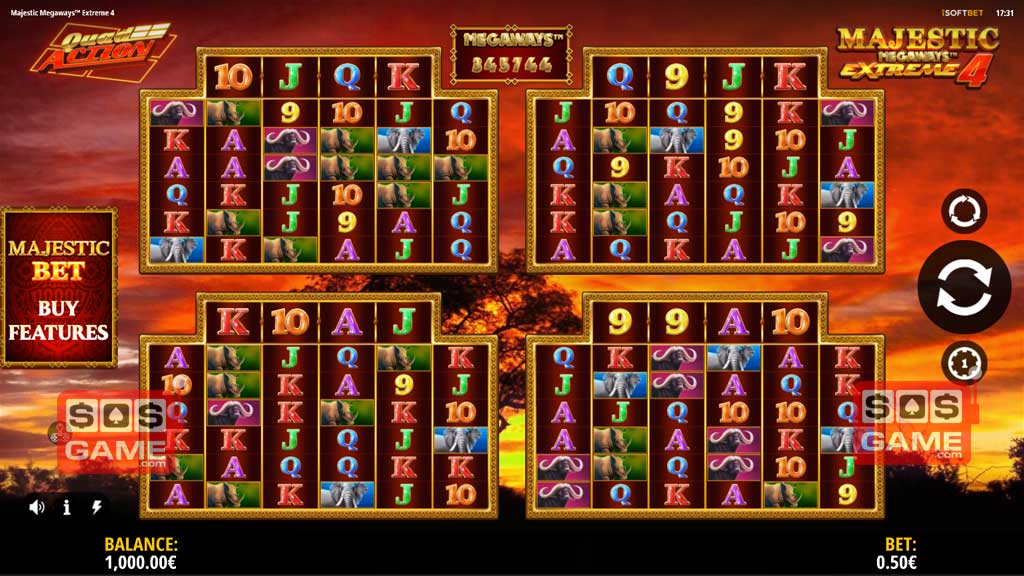 The African savanna is filled with exotic wildlife and is ideal for a wild safari. iSoftBet has beautifully incorporated this theme in “Majestic Megaways Extreme 4” slot.

In this game, players are taken on a wild ride in search of valuable riches.

The slot has an adventurous opening with the majestic African sunset in the horizon. The beating soundtrack and birds soaring in the background give an immersive experience.

Majestic Megaways Extreme 4 takes place on four 6 reeled boards and offers 117,649 ways to land a win. The slot has a wager limit ranging from $0.5 to $50, making it suitable for players of all variances. With a maximum cash jackpot of $500, the medium volatility slot has an RTP of 96 percent.

The free slot is packed with special features that yield handsome rewards. If a player lands a Wild symbol, it can be substituted for any other symbol except the bonus symbol and is only found on the top tracker. The top tracker is found on reels 2, 3, 4, and 5. The feature adds one symbol in these above mentioned reels.

The cascading wins feature goes well with the megaways mechanics. Whenever a player forms a win, symbols that were part of the win are removed from the reels and are replaced with cascading reels.

If a player can land 4 Scatters on a single reel set, the bonus feature is triggered. The bonus feature offers either free spins or the Majestic Megaways Extreme spins. If a player lands 3 or more bonus symbols on the top tracker, the free spins feature is triggered. The feature can be played on a single reel set and comes with an unlimited win multiplier that starts at 1x.

The Majestic Megaways Extreme spins feature can be played on 4 reel sets and offers a staggering amount of 470,596 winning ways. The feature begins with only a single active reel, but the others can be unlocked during the feature.